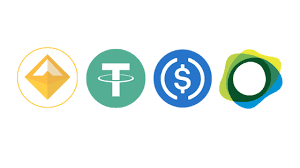 Disclaimer: the stories shared on this blog are mine, they aren’t financial advice, endorsement, counseling of any kind. Do your own research, never EVER take loans to acquire crypto, and never invest what you can’t afford to loose.

In a market freely driven by supply and demand, volatility is to be expected. But when it comes to a highly speculative deflationary asset such as Bitcoin and plenty other cryptocurrencies, the volatility is extra high. Too high for comfort for most stock/Forex traders.

With the appearance of smart contracts however, it became possible to dynamically control the issuance of a cryptoasset, and thus making “stablecoins” possible.

There are many “stablecoins” available, most of them pegged to a fiat currency, some others to the gold market or other natural resources, or even stock markets. Or cryptocurrencies in other blockchains. But this not what this story is about.

Because not all “stablecoins” are created equal.

This first category is certainly the easiest to understand: for each unit of an asset frozen in an account, a token is issued on the blockchain. In effect, the token holds a 1:1 value compared to the asset it represents, and is akin a contract.

Simple example: an $50 Amazon gift certificate. It has been “minted” by giving Amazon 50 USD. In turn, Amazon guarantees the user the certificate can be used to buy $50 worth of goods in it’s store.

Transposed in the cryptocurrency world, one can easily find examples of such stablecoins:

To be able to receive and hold deposits, all those companies must be registered and follow strict regulations and audits, including (and especially) audit of the deposits. Should any company run on a fractional reserve, and not be in fact able to cover the value of every token issued, then the token can implode. This is why Tether in particular is under close scrutiny by the SEC lately, as they got recently fined for misrepresenting the deposits held.

The fact that these tokens are issued by an authority (a company), a de-facto central bank, is one major source of criticism against such tokens from the crypto community.

And in any case, these stablecoins are ever only as “stable” as the deposits they represent: fiat currencies are inflationary, sometimes hyperinflationary, and the deposits could be worth nothing, turning the tokens worthless or even break-peg if the company looses money holding deposits in banks (negative interest rate). Worse: the funds in the bank accounts can be frozen, making the tokens inconvertible and worthless.

Using a stablecoin can however be a rather safe hedge when holders from country A prefer to hold a token pegged to a stabler currency of country B.

Decentralised ~1:1 pegged arbitrage-backed
In this category, you’ll find lesser known tokens such as Basis or Carbon.

To reach and maintain a loose peg to an asset (say, US Dollar), an algorithm controls supply and demand, acting like a central bank influencing inflation rate by issuing more or less tokens.

If the algorithm is “sensitive” enough to pick up variations quickly (but not too quickly to evade false signals), the peg can be maintained. Of course this goes as long as the token remains desired: if it’s not being traded, then the relative value stales and desyncs from the represented asset.

For this last type, the stablecoin is issued from a collateral asset, and maintains it’s peg by arbitrage.

Most notable stablecoins in this category are:

While the value of the stablecoin is guaranteed by the collateral, the peg is algorithmically maintained by offering an arbitrage opportunity:

So the peg is maintained by a balancing between two assets, one of them deflationary and thus desirable, all while rewarding arbitrage.

Sidenote on decentralised stablecoins: being by principle on-chain, they are publicly auditable, and their optional collateral too. In this, they follow Nakamoto’s view of zero-trust and sovereignty of code, as opposed to trusting a company’s fiat bank account holdings.

Reminder: money is a social construct, and nothing is stable and absolute in the universe. While “stablecoins” provide a virtual stability compared to their represented asset (and the convenience of fast decentralised cheap transactions), they CANNOT fix the risks and shortcomings of neither the asset nor the blockchain ecosystem they reside in. Handle carefully!